Work began on 12th September 2010 on the beach top-up of a section of beach at Southbourne by the Fareham-based Westminster Dredging Company.

The pumping of approximately 70,000m3 of beach material was completed on 20th September and the beach fully reopened to the public 10 days later.

A project to replenish a section of beach at Southbourne between Portman Ravine and Fisherman's Walk. The third and final of the Bournemouth beach top-ups.

The Crestway made her first delivery to the beach on Wednesday 4th March 2009.

Beach material was dredged off the Isle of Wight and brought close to the beach by the dredger from where it was pumped ashore through a 300m long floating pipeline and then levelled by bulldozers.  The dredge/sail/discharge cycle from the IOW took approximately 11 hours.

The existing timber groynes 51 and 52 are life expired and will shortly be rebuilt, using the replenished beach as a working platform.

A project to replenish a small section of beach at Southbourne. The dredger Crestway delivered sand to the coast between 4th-21st March 2009. 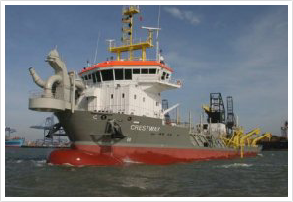 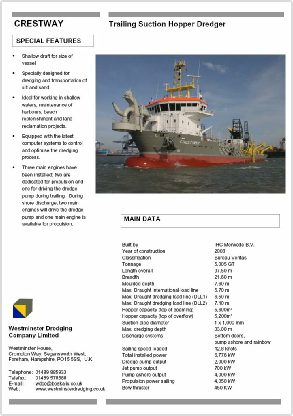 Detailed data on the Crestway

A section of beach between Boscombe and Southbourne was replenished this winter by the Fareham-based Westminster Dredging Company and the Dutch dredger Oranje.

The project suffered bad-weather delays. Originally projected to take just 3 days, the eight hopper loads of sandy beach material were delivered to the beach over a period of one week.

Beach material was dredged off the Isle of Wight and brought by the dredger close to the beach at Groyne 30 (see map). The dredge/sail/discharge cycle from the IOW took approximately 11 hours.

Because the waters of Poole Bay are so shallow, the dredger needed to pump the sand ashore through a long pipe that lay on the sea bed, known as a 'sinkerline', and the beach was then levelled by bulldozers.

A project to replenish a small section of beach between Boscombe & Southbourne. The dredger Oranje delivered sand to the coast between 8th-14th March 2008. 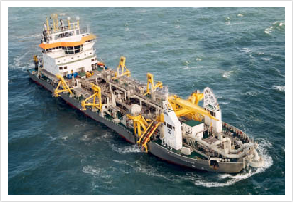 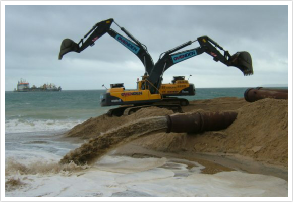 The sinkerline delivers beach material from the dredger, which is levelled by bulldozers 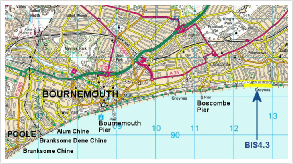 The sinkerline was positioned on the beach just west of Groyne 30 (Portman Ravine) between Boscombe and Southbourne.  From there four groyne bays were replenished, working east to Groyne 32 (500m), and west to Groyne 28 (300m).  Groyne numbers are indicated along the promenade. 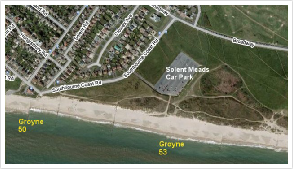 Three groyne bays were replenished between Groyne No's 50 and 53 at Southbourne.