Will I be able to use the beach while work is in progress?

Yes, but in the interests of health and safety, it will be necessary for us to close off a short length of beach at any one time while sand is being pumped by the dredger, and moved by bulldozers.

There is a slight risk of quicksand developing during replenishment work, so it is best not to go onto the new beach for a few days, until the water drains away completely.

The promenade remains open at all times even when pumping is underway.

Where does the beach material come from?

For the Shore Road Beach Repair project of 2014, and for the major Poole Bay replenishment project 2005/06, material was dredged from Poole Harbour channel & approaches and reused on the beaches, which benefits our coastline and helps maintain water depths for safe navigation of the harbour.

For the replenishment of Bournemouth beaches (2006/07) and subsequent beach top-ups material was taken from a Licensed Dredging Area off the Isle of Wight.

The material used is a combination of approximately 90% sand and 10% shingle. The coarser material is needed to ensure the beach is not washed away during storms. From time to time, it will rise naturally to the surface, particularly at more exposed areas in the east of the bay.

How does the sand get on to the beach?

Sandy material is dredged from the sea bed and brought by dredger close to the beach. Because of the shallow water, the dredger will pump the sand ashore through a long pipe. The sand is mixed with a considerable amount of water to enable it to be pumped. As the mixture leaves the pipe, the water flows back to sea, leaving the sand behind. The beach is then levelled by bulldozers.

Initially the sand will look darker than that on the current beach, but will lighten to a normal colour with exposure to oxygen and daylight. During the first few weeks, small cliffs may appear in the beach as wave action sorts the new sand into a natural beach profile.

Replenishment will result in a wider beach than before.

The cost of beach replenishment and other flood defence projects is funded by the government through Defra (Department for Environment, Food and Rural Affairs) and the Environment Agency, based on detailed risk management appraisals.

Why are groynes needed on the beach?

The whole of Poole Bay from Sandbanks to Hengistbury Head is an eroding coastline. Many thousands of cubic metres of beach material is lost each year. In order to safeguard cliff-top property and infrastructure, a long-term programme of engineering works must be implemented.

The beach replenishment projects undertaken between 2005 and 2007 delivered more than 1.5 million cubic metres of beach material to our coastline. The resulting wide beaches have been a success in terms of their function as a coast protection structure and for the enjoyment they provide to local residents and visitors. Beach control structures are required to ensure they remain that way for as long as possible.

Groynes have been used extensively in the UK and abroad to tackle coastal erosion. They work by reducing the wind and wave-driven movement of beach material along the coast, and by trapping and holding sand within the groyne bays.

If they are so successful at keeping sand in place why don’t we have more groynes on Poole beach?

Borough of Poole coastal engineers have considered building rock groynes all along the beaches in Poole. However the computer modelling showed little difference in the overall cost of building groynes and beach replenishment (technical reports on the options are available, right). Even with groynes in place we would still need to do some replenishments works, as Bournemouth Council do on their beaches.

With this in mind, when consulted about what type of beach they preferred, the public view was “no groynes if possible”.

The beach at the Sandbanks end of bay rarely needs replenishment as it is somewhat different to other beaches in Poole Bay - sand is fed onshore and offshore from Hook Sands.

What plans are there for future coast protection?

The beaches are constantly monitored and the Council will continue to work with Defra and the Environment Agency on any future beach replenishment and any groyne repair/replacement projects that may be necessary.

Such work will be carried out as part of the local Shoreline Management Plan (SMP2) which is available to view in full at www.twobays.net 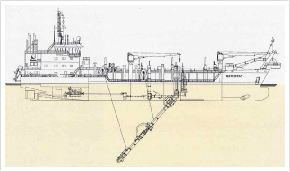 Sandy material is dredged from the sea bed for beach replenishment

The need for coastal defence measures at Poole has been dealt with in a number of recent technical studies, which include: