Working with the natural landscape to prevent flooding of commercial and residential property and to improve water quality. 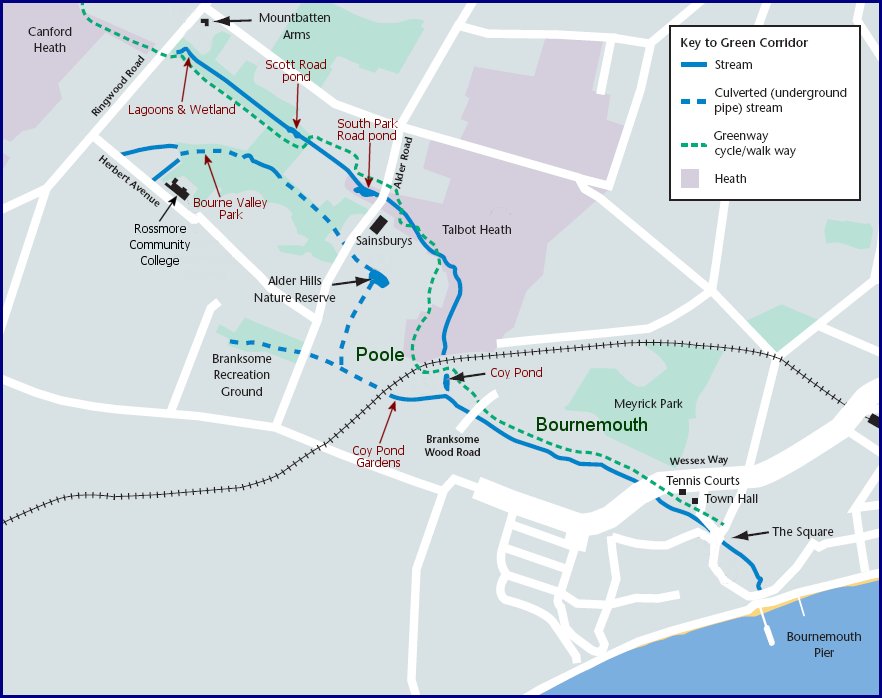 Sustainable Drainage Systems (SuDS) is the collective name given to cost-effective, low impact methods of working with the natural landscape to help prevent flooding to commercial and/or residential properties whilst improving water quality and enhancing areas for people and for wildlife. Examples of SuDS might be opening up a piped section of culvert to create an open stream, digging a pond to hold a larger volume of water or planting reed beds in a stream to both slow the flow and improve the quality of water passing through them.

The SuDS created in Poole focus on the Bourne Stream and its passage from Ringwood Road in Alderney through the Bourne Valley SSSI down to Bournemouth Gardens and the beach at Bournemouth Pier. The stream comprises two main tributaries totalling just over 13km of waterway; of this total length 5.7km is culverted and 7.5m is open stream.

On its journey the Bourne Stream passes through greenspace, nature reserves, formal gardens and close to residential areas. In the past there had been issues with residential flooding and pollutants entering the stream via road runoff from Ringwood Road at the top of the system during rainfall events and periods of high flows.

A number of schemes were put in place between 2000-2007, carried out with the funding and support of a partnership of eleven local member organisations from both the public & private sectors – the Bourne Stream Partnership. Members pooled their expertise and resources to work together towards addressing the issue of localised flooding whilst adding to the amenity and environmental value of the stream:

Programmed SuDS maintenance will be planned and carried out at timely intervals – this will include vegetation clearance along channels and within structures as necessary, digging out of sumps and ensuring structures are maintained. A management plan will be written which will consider future management options and timescales.

Water from the stream is directed first into a sump (pond). This slows the flow of water down which results in it dropping any of the larger particles of silt and the pollutants it may be carrying. On average 75% of the stream’s flow at this point should pass through this structure.

This water will then make its way slowly through a series of large troughs (lagoons) dug into the ground. The troughs have been planted with reeds which will further aid the cleaning process of the water by collecting any finer particles of silt that might not have dropped out in the sump.

The flow then rejoins the stream via an outlet at the far end of the structure. Not only will the water now be pollutant and silt free but the troughs and sump have acted as a storage facility to alleviate possible flooding downstream by holding back the water.

A lot of wildlife takes advantage of this area including dragonflies and damselflies who like the calm troughs of water to hunt and breed on. 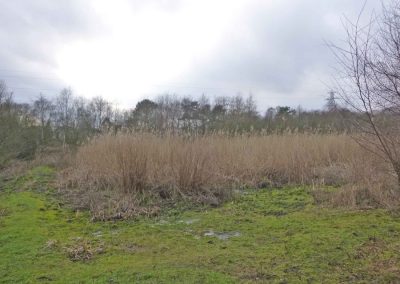 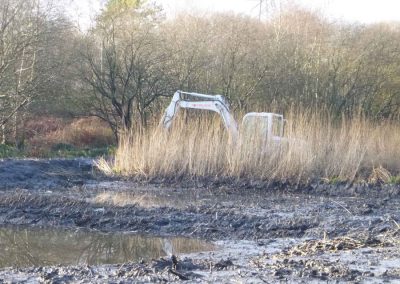 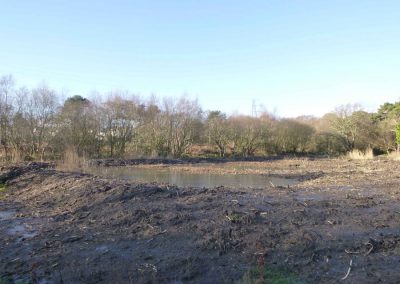 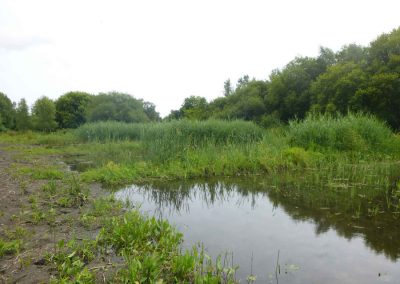 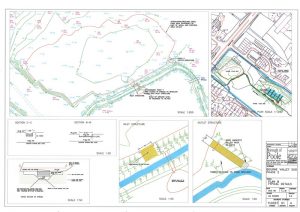 SuDS Phase 2 is upstream of Phase 1; it is located beside Ringwood Road, at the top of the stream system, and has the role of collecting the first flush of heavy rain and trapping the pollution from road runoff to stop it flowing down the stream. Phase 2 was first dug in 2001 and then redug at the end of 2015.

When it rains the water level in the stream will rise. The top section of this raised level of water (which will contain the greatest amount of pollution) will flow over the inlet and into a large pond like structure. As the flow moves into the wider space the flow will decrease and, as with SuDS Phase 1, silt containing the pollution will drop out and settle. The water will then flow around the pond, through reeds and rejoin the stream through an outfall at the bottom end of the ‘pond’.  As with Phase 1 the pond acts as storage facility, cleans the water and is an attractive place for wildlife.

On average 25% of water from the stream will flow through Phase 2. If we were to drop the level of the inlet and encourage more water through the structure the flow of water would speed up and would not therefore have a chance to drop the pollutants that it might be carrying. 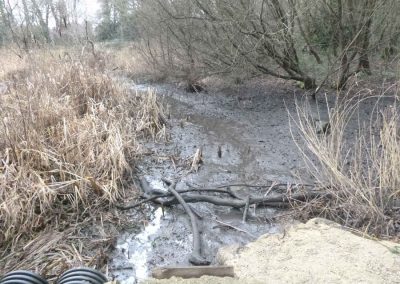 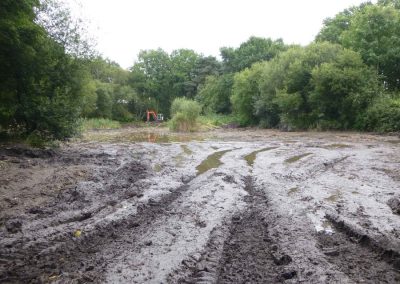 The area now known as Bourne Valley Park was once a recreation field that suffered a lot of issues with flooding and very boggy ground that had made it practically unusable during the winter months.

The main problems were caused by it being poorly drained and low-lying; water would collect after a period of rain, and would flow down from higher ground. The Bourne Stream here had been routed into a culvert that ran below the field, and as the surrounding area became more densely populated with homes, roads and other hard surfaces, the culvert was unable to cope, occasionally backing up and causing flooding issues for homes upstream of the field. These issues were solved in 2006/07 by de-culverting a 450m length of the stream, creating a storm water detention area through the use of a wide terraced & planted channel, a weir, meanders and basins that act to slow flow and store up to 3,500 cu.m. of flood water.

Not only was this project successful as a SuDS, it made the space a much more pleasurable place to visit, with a fishing lake, bridges, seating and footpaths throughout the better-drained site; Bourne Valley Park is now well used by the local community all year round. 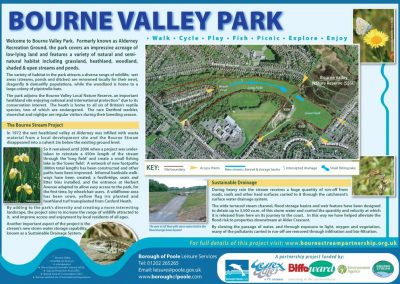 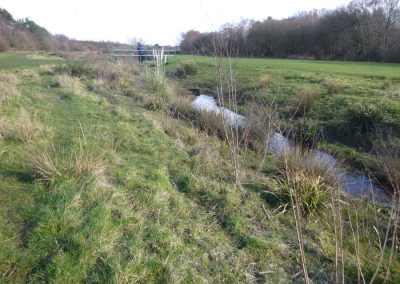 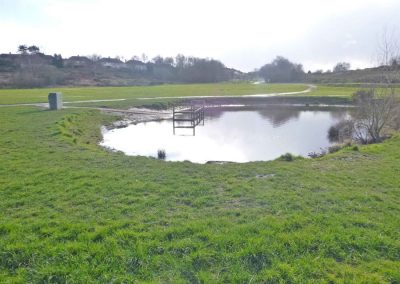 In 2003 a series of ponds and adjacent streams in this area were reinstated and cleared of silt and vegetation. At South Park Road stream flow was channelled through a large area of reedbed just upstream of the pond to allow sediment & pollutants to settle and be cleaned. This work helped to increase the storage capacity of the ponds, improve the area for wildlife and the amenity value of the space for local residents.

Some areas were redug in 2016, vegetation was cleared and a sump area redug which will aid the removal of any pollutant or silt which may have entered the system before it gets into the ponds. 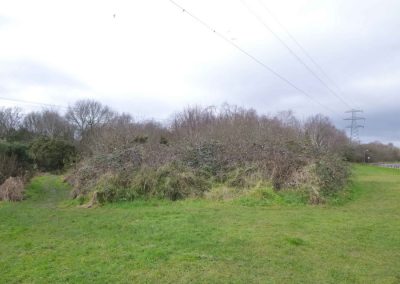 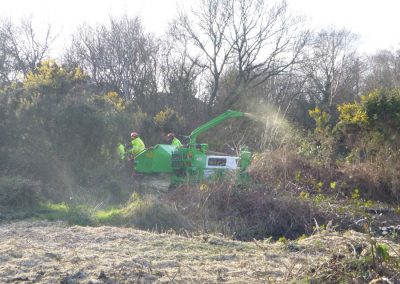 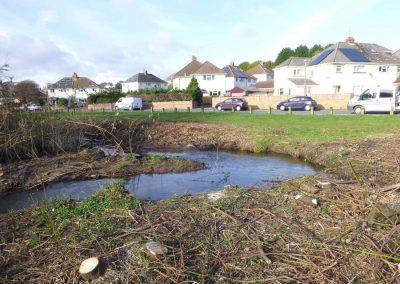 During 2003 many changes were made to Coy Pond Gardens to improve the drainage infrastructure where the Bourne Stream emerges from a 2.5km length of culvert. The contours of the land were reprofiled to allow a greater volume of water to be held in times of flood. The old footbridge was demolished and replaced with one designed with a built-in weir (control structure) to slow stream water flow.

The footpath was relocated to higher ground, away from areas that might suffer heavy flooding. The area was also planted with vegetation that thrives in wetland conditions which would help slow flow down in times of flood and trap polluted sediment that would have entered the water upstream.

Further information about the Bourne Stream Partnership and the projects outlined above can still be found at an archived website (last updated 2012) at www.bournestreampartnership.org.uk