Bournemouth beach loses approximately 70,000 m³ of material annually (1 million m³ every 13 years). Since the predominant direction of longshore drift in Poole Bay is from west to east, sand gradually moves along the beaches of Southbourne and Hengistbury Head, and beyond into Christchurch Bay.

The shoreline has been replenished on several occasions in recent years; these projects are referred to as 'Beach Improvement Schemes' (BIS).

BIS2 & BIS3 represented a "boom & bust" approach to replenishment schemes, where the beach was delivered with a large quantity of material (i.e. 1974/75) and left until much of it was lost before funding was available for further replenishment (i.e. 1988/89). From 2005 funding allowed for a change of approach, with BIS4 delivering a 5-year phased replenishment, from 2008-2010 making good annual losses that kept the beach at a constant level and volume until 2012. Replenishment schemes at Bournemouth now form part of the wider Bournemouth Beach Management Scheme 2015-2032, with projects planned every five years.

The first phase of this Poole Bay replenishment project saw approximately 1.1 million m³ of material replenish beaches at Swanage, Poole & Bournemouth (Hengistbury Head to Southbourne) to protect them from erosion. For Bournemouth this was Beach Improvement Scheme (BIS) 4.1.

The project continued along Bournemouth beach during the winter of 2006/2007 (BIS4.2), between Boscombe and Alum Chine, using a further 900,000 m³ of sand from a Licensed Dredging Area off the Isle of Wight.

Bournemouth beach has been replenished on four previous occasions in the last 36 years and is now effectively an artificial beach.

Work was carried out by the Fareham-based Westminster Dredging Company with the Dutch dredger “Oranje”. The project team arrived w/c 6th November 2006 to undertake hydrographic and side scan sonar surveys of the sea bed. The Oranje arrived on 13th December.

The beach was first replenished east towards Boscombe Pier & Southbourne. Work continued west to Bournemouth Pier and on to Alum Chine. The project was completed on 23rd January 2007. 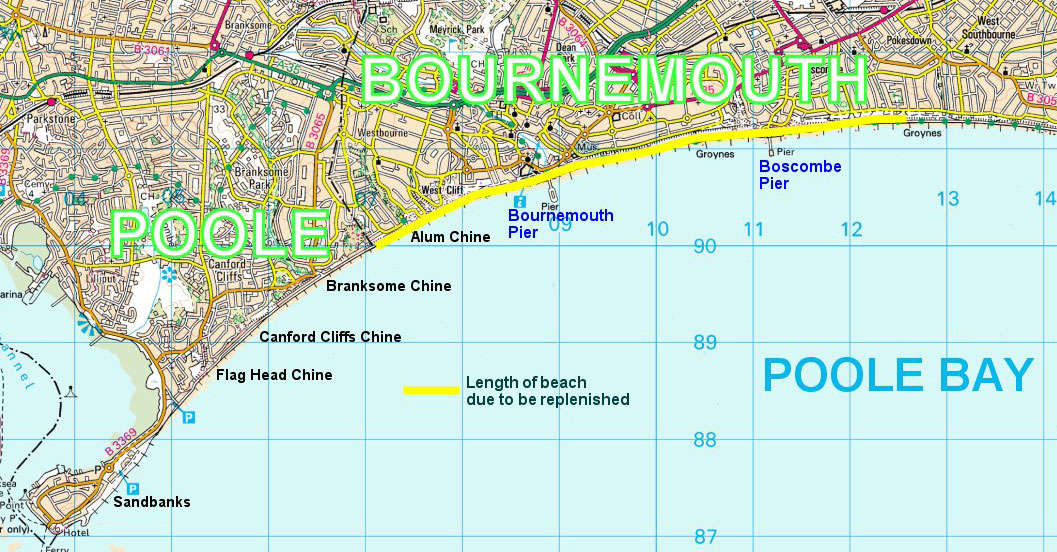 The Need for Beach Replenishment

The standard of flood and coast protection at Poole Bay depends mainly on the level and width of its beaches. Construction of seawalls and promenades over the course of the last century (1907-1970) put a stop to the natural supply of beach material from cliff erosion and it is necessary to occasionally replace beach material lost to longshore transport to the east, driven by wind and waves.

In the 30 years between 1970-2000 almost 2 million m³ of sand was used to replenish the beaches at Bournemouth and Poole. Since the predominant direction of longshore transport at Poole Bay is from west to east, new sand gradually feeds the beaches at Southbourne and Hengistbury Head to the east, and beyond into Christchurch Bay.

The on-going need for beach replenishment was identified in the Poole and Christchurch Bays Shoreline Management Plan 1999, and a subsequent report by Halcrow (2004) suggests that a further 3 million m³ will be required over the next 50 years in order to maintain protective beach levels and widths.

For Phase 1 of this project material dredged during a Poole Harbour deepening project was used for beach replenishment, but the quantity of sand available was insufficient to complete the entire beach at Bournemouth. Work continued during winter 2006/07 (BIS4.2) using material purchased and transported from a Licensed Dredging Area to the east of the Isle of Wight.

Bournemouth’s existing timber groynes will last another 8 years or so, after which consideration will be given as to what should replace them.

In the past Bournemouth beach has been replenished at intervals of 15 years or so, by which time most of the sand has been lost. For the next 3 years small scale top-ups will be used to maintain beach width and volume.