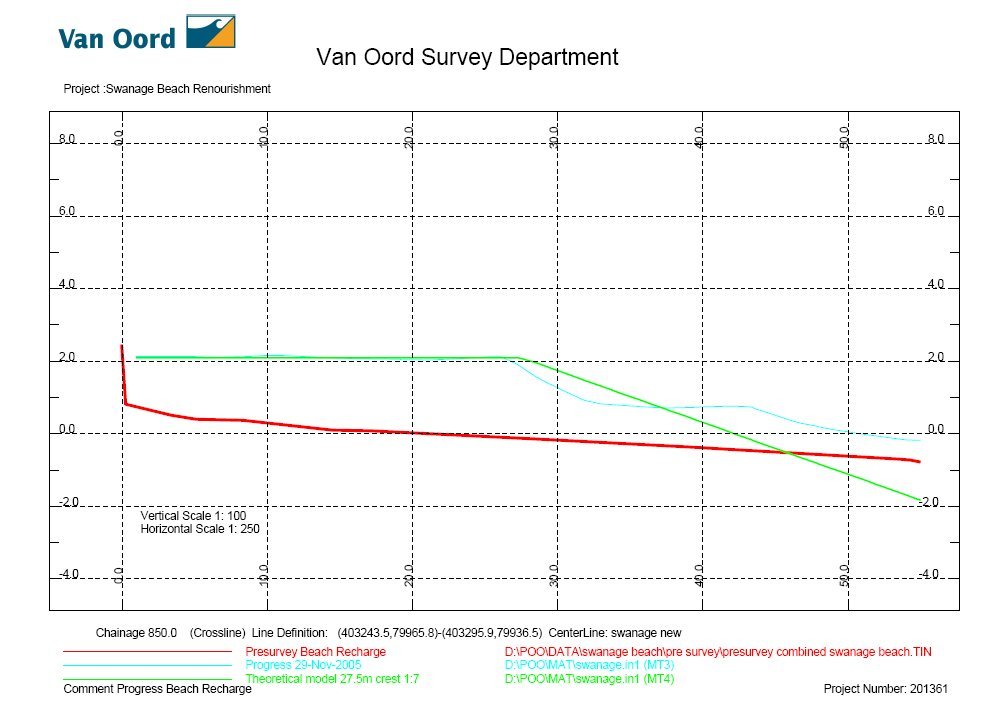 This example chart displays a beach profile at Swanage, comparing pre-project levels with those surveyed on 29th November 2005, six days into works there:

Main contractor Van Oord UK carried out the harbour dredging works and brought sand to the relevant stretch of coastline where they pumped it ashore through a sinkerline; involved in this process was:

Beach works (moving and levelling the sand pumped ashore) was sub-contracted to Kent-based Ovenden Earth Moving who moved pipelines and sand around the beaches using a range of plant including excavators, bulldozers and pipe loaders.

THSD “Volvox Scaldia” was used to replenish Swanage beach and then demobilised. THSDs “Ham 311” and “Waterway” worked together to replenish beaches at Poole and Bournemouth. 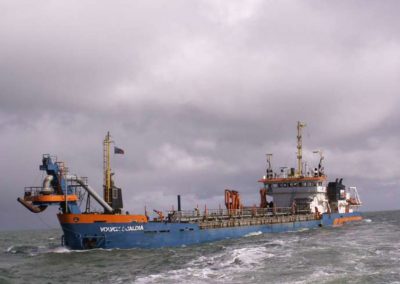 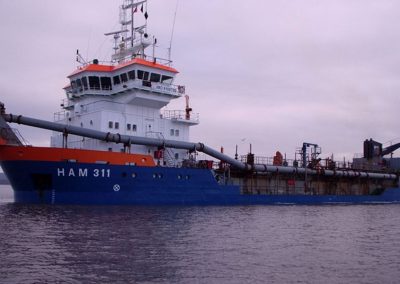 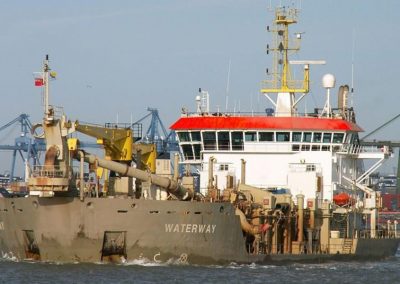 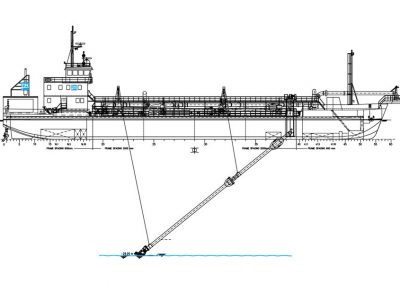 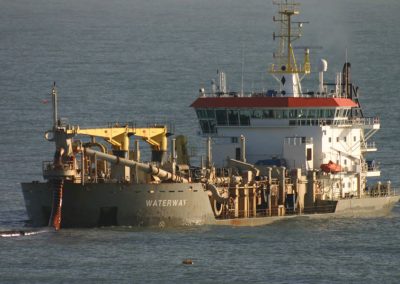 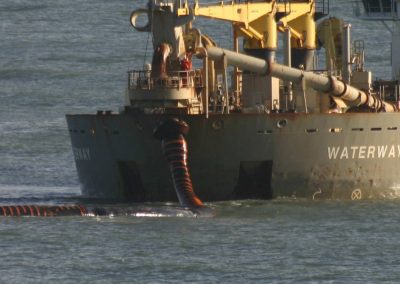 A trailing suction hopper dredger (TSHD) is so called to reflect the fact that this type of vessel dredges while slowly sailing, trailing one or two suction arms off the side of the hull. At the entrance of each suction arm is a draghead; the draghead collects sediment (sand, silt and gravel) from the seabed in a similar way that a vacuum cleaner works. Dredged material is pumped into the hopper, where it is stored for transport. When the hopper is full, the dredger sets sail for the discharge location.

A welded steel pipeline, known as a sinkerline (which for this project was approximately 750m long x 700mm diameter) is assembled and brought to site by tug where it is floated into position; it is sunk to the seabed where it remains during replenishment work, acting as a link between dredger and foreshore through which dredged sediment is pumped. Use of a sinkerline reduces interference with other marine activities in the area.

At the seaward end of the sinkerline is a 36m flexible riser pipe section, followed by a 100m flexible floating pipeline which connects to the steel section which lies on the seabed. On arrival at the discharge point, with assistance from a multicat, the dredger is manually coupled to the flexible riser via a bespoke coupling ball-joint system.

At the landward end the sinkerline is fitted with a steel flange from which sections of onshore pipeline (each section approximately 12m long) can be coupled to discharge sand to the required locations. Y-pieces with valves can be introduced to the pipeline to direct the loads to different areas of the beach.

Sand bunds are created at the end of the shoreline pipe; sand is pushed both toward the seawall (for protection) and towards the shoreline to retain the new sand on the beach and avoid losses to the foreshore. A sand/water mixture is pumped from the dredger through the sinkerline; it flows from the shoreline pipeline into the bunds where it settles on the beach, with the water returning to sea. The sand that remains behind is then moved around and levelled by bulldozers. Additional sections are added to the pipeline and the process is repeated further down the beach. 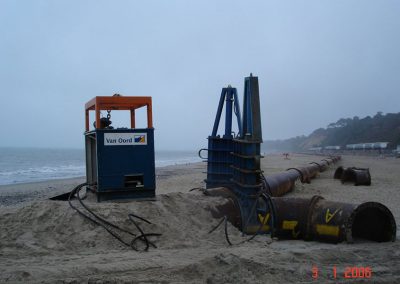 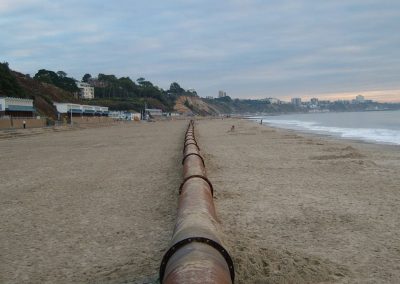 The onshore pipeline at Poole (at this point 1,640m long) 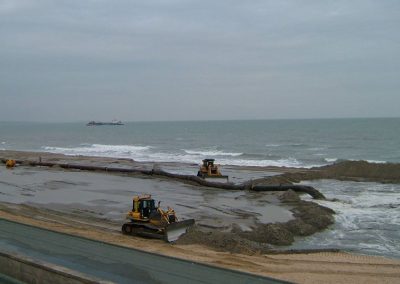 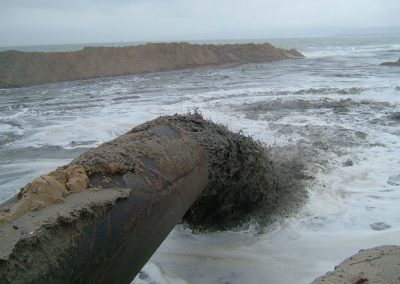 Pumping the sand/water mix into the bund 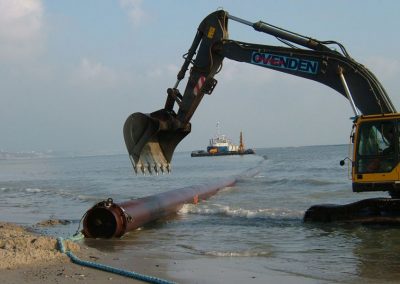 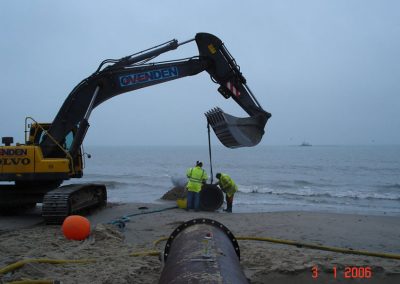 Landward end of the sinkerline 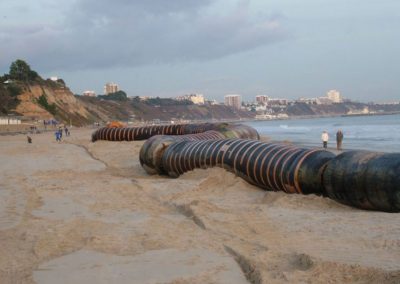 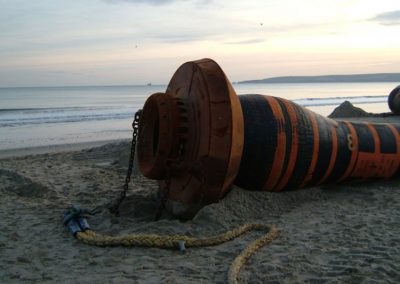 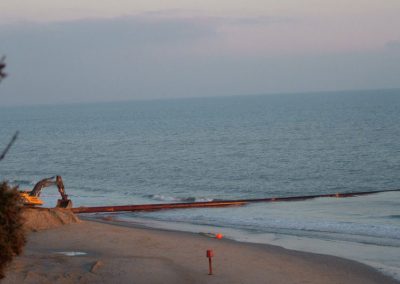 Positioning the sinkerline prior to sinking it to the seabed

There are two factors to take into account when estimating the quantity of sand reaching the beach. The amount we claim as pumped ashore is recorded by the dredger and we have to allow for a “bulking factor” of 1.2 due to the material being mixed with water in the hopper. For instance, if we’re told that 3,000 m³ has been pumped from the hopper it would equate to 2,500 m³ actual material dredged.

These figures provide guidelines. Beaches are independently surveyed on a daily basis, comparing levels and widths to a baseline survey carried out before work commenced, and in that way we get a far more accurate idea of how much sand has actually been delivered (example beach levels chart).

During the project Van Oord ran trials for a newly developed method of monitoring flow & volume through the pipeline. 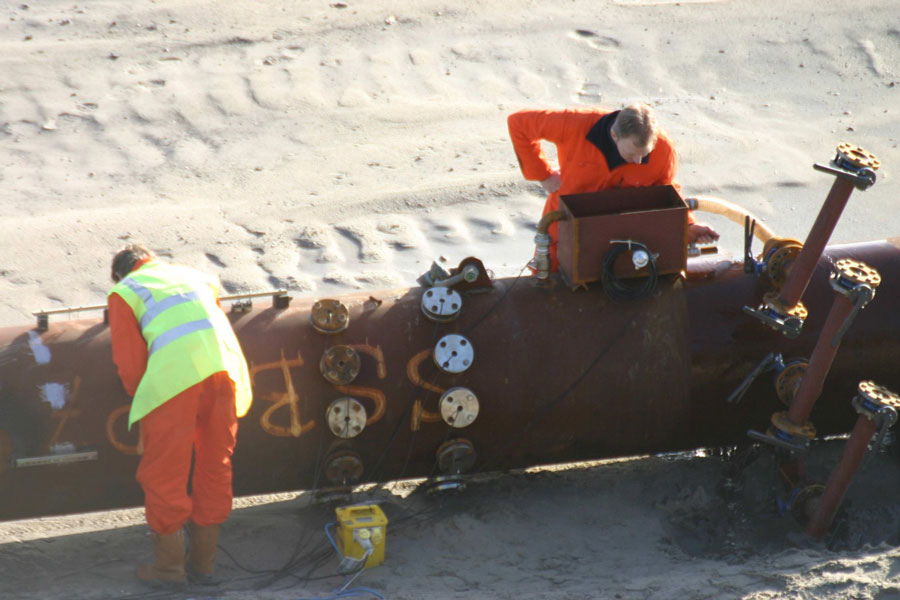 Setting up the trial monitoring equipment at Poole beach (January 2006)