Portland limestone is normally used for groyne construction at Poole Bay, brought to site by road.

Each rock for the head section of groyne weighs three to six tonnes, and for the section from the head back to the promenade one to three tonnes.

At the beach, sand is first excavated from the area where the groyne will be located. The area is then backfilled with a bedding layer of stone to prevent subsidence of the groyne structure. Using this method of construction the groyne is extended seawards with bedding material and rock, building up to a level that will permit plant to run on it.

As construction progresses to full groyne length manhole rings are used to create voids to take the piles for the walkway that allow public access to the groyne. 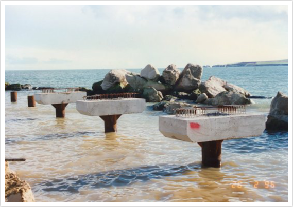 ent structures consisting of concrete beams spanning piles driven along the length of the groyne. Walkway sections and pile caps are made at the beach from reinforced precast concrete and lifted into position.

Construction proceeds with the head of the groyne being built to its full height. Piles are then driven into position through the voids by a vibrating rig (and air hammer if required). Working shoreward pile heads and walkway sections are put into position at the same time as rock is built up to the finished level.

The whole operation is then able to retreat off the groyne leaving a near completed structure; just the in situ joints and infill between the walkways and pile heads are completed later.

Access ramps are situated between the back of the groynes and the promenade, made from concrete poured in-situ and tied back into the existing stepped sea wall. First the wall sections of the ramps are poured, then the ramp is filled with beach sand and the slab section is cast on top.

Groyne construction methods have changed little since groynes were first built at Sandbanks in 1996 and again in 2001 (photos on this page were taken during the 1996 project). 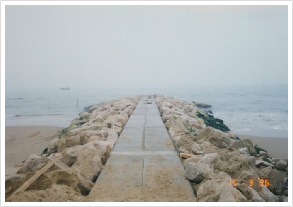 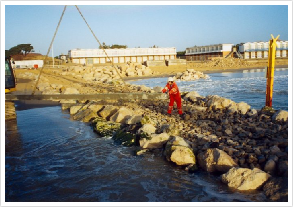 Walkway sections being lifted into place